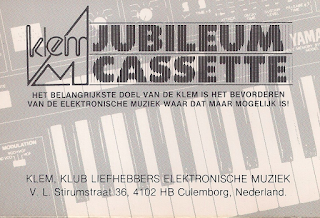 Klem stands for 'Klub Liefhebbers Elektronische Muziek', a dutch fan group for all things synth and cosmic, organising occasional events. In 1986 they already existed 25 years and released this cassette with unreleased (as it says on the cover) music by Age, Ashra, Neuronium, Walter Rothe, Robert Schröder, Klaus Schulze and Tangerine Dream. It was solely for sale for members of their Klub. They also did a fanzine/magazine, which I would love to read again. I don't have any.

Old fanzines/mags are a huge missing link in the digital world indeed. KLEM, Eurock, Waves (Germany), The KS Circle etc... I would love to see them appear in digital format one day. I used to have a lot of them but gave them away years ago.

Next thing would be books, all those biographies, discographies (KS Works) etc.