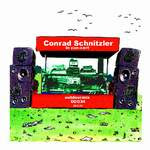 I didn't expect to start again so soon, but I have some tapes again, and maybe get a few more soon, but also I got hold of a whole bunch of rips of private CDR releases by Conrad Schnitzler. He made these on demand, starting already in the mid-90s up to a few days before he died, in August 2011. This friend of mine got a whole bunch of these in 2004 and ripped them before selling them. So, the bitrate seems quite low but it is a Variable Bitrate (VBR) with a high bitrate at complex high pitched parts en a low bitrate at quiet passages but if you think about leaving a comment along the lines 'hey dude (normal nomenclature for some people; I hate that) in this age you can't come along with anything less than Flac', then please don't bother. I moderate comments and will trash them. Expect really a whole bunch to come from these CDRs. My friend didn't make scans of the CDRs, so I have to use the ones from this excellent site, which are rather small. It's this or nothing at all.

Schnitzler wrote back then about these CDRs

Not available in any shop.
You can order different works directly from me. It is music on CDR´s.
To save weight and money, I send the CD´s + CDR´s without the jewelbox.
The normal CDR´s:
White label black letters.
Unlimited + signed + dated + mailed (no frontcard no inlaycard no jewelbox)
New is the paper cover and labeldesign.
1 CDR with picture label + picture cover + title + certificate + signed + dated + mailed
All my tapes + CDR's are numbered. (Studio running numbers)
Cover and labeldesign and title are not in context with the music.
Pictures are better to remember than numbers.

For future posts I won't repeat all of this, but only mention like this: 00/034 is labelled 'ElectroInstru Expressivo Pieces' and lasts 61 minutes. Tracks are untitled.

Grateful for this, no matter what the bit rate, and thrilled to hear that you'll be posting others. Mega thanks!

Whoa! very cool, had no idea these were even out there??

A legend. Thanks so much for this, and looking forward to more!

Very nice, this is exactly what blogs like these are ment for
Thanks!

Thank you very much! Look forward to all of your new posts!

Many thanks for all your work sharing these treasures.