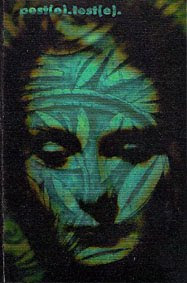 Inspired by yesterday's post I guess, there is here today Pest(e), Gregory De Rocher's first musical outing. From discogs: "Lowfish is the musical guise of Gregory de Rocher. Born in Toronto in 1972, Lowfish spent his earliest years plagued with hearing problems and confined to hospital sound testing labratories monthly. Once cured, young Lowfish found sanctuary in the sound of music, and was particularly infatuated with his mom's disco 8-track of Giorgio Moroder's robotic masterpiece "I Feel Love". On a subsequent triip to the Ontario Science Centre, Lowfish witnessed a modular synthesiser demonstration, where he made the connection between this machine and the punchy analog sounds that would later form the basis of his sound. Raised on substantial doses of industrial music (Skinny Puppy, Nitzer Ebb) and early melodic electronica (Aphex Twin, early Warp Records output) Lowfish now finds himself an influential international player in both the worlds of electro AND electronica. Along with numerous compilation and remix appearances, 1997/98 saw Lowfish release a string of 12 inch's on his then fledging Suction Records label. 1999 saw Lowfish release his first acclaimed full-length, "Fear Not The Snow and Other Lo-Fiing Objects". Lowfish's 2nd full-length, 2001's "Eliminator", brought him both into the homes of descerning electronica fans AND into the crates of famous DJ's like Andrew Weatherall and Miss Kittin. 2002 saw an explosion of Lowfish output: a thunderous electro 12 inch "The Accidental Causer" on Detroit's Ersatz Audio, a unique "electro-class" EP, "Maintain The Tension" on Suction Records and an outstanding contribution to Ghostly International's seminal "Disco Nouveau" compilation. Lowfish has recently been bringing his unique brand of "drum machine electro-pop" to the stage. Playing solo and in tandem with Suction Records partner Solvent, Lowfish has performed for audiences worldwide alongside names like Tiga, Adult., Legowelt, and 2 Many DJ's. October 2003 sees Lowfish release his strongest work to date: "1000 Corrections Per Second" is Lowfish's third full-length release. If the international press (DJ Magazine, URB, Jockey Slut, Muzik, etc.) can be believed, the future of intelligent, catchy and unique melodic electro belongs to Lowfish. He's more than up for the challenge."
Its, although not mentioned on the tape, the first release by Suction Records, catalogue number 000. Excellent electro pop stuff.