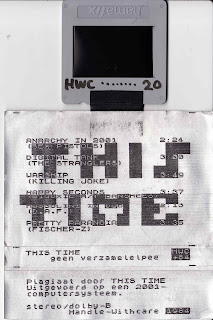 This was made by the same person that did the Terrorzone cassette, somewhere else on this blog. Long before VVM (& the Works) and even a year before the term 'plunderphonics' was introduced by John Oswald this nerdy guy from Rotterdam made his own version, fucking up well known songs from those days with his self built effects. 20 copies were made of this release and according to the sleeve they must have cost 750 guilders each! (about the same as 750 euro's now). Well i guess that's what I paid for it... I've got number 20.