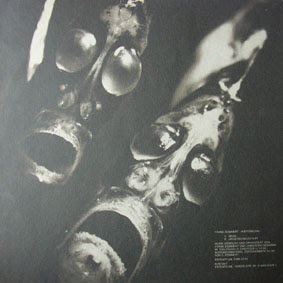 These days Dommert is still around, mainly doing work for labels as Sonig and helping out Mouse On Mars, but in the late 80s he produced some music himself. Three tapes, which I don't have, one 7" with HNAS (which I think is on Mutant Sounds), and 'Kiefermusik', the LP he recorded for his Entenpfuhl label, which also released the previously posted C. Schulz album. Dommert's own music owes more to musique concrete in similar vein as Hajsch. They all were members of Kontakta, a short lived but highly infuential band from Cologne.

Sorry for the "Massexodus.com" drama - and many thanks for your patience to re-up this one. Dommert is regularly played on Klangkunst (Sound art) radio shows here in Germany, so I'm quite excited about listening to his earlier works. Many thanks again; hope the deletion/re-up workload hasn't undermined your enthusiasm to continue rescuing forgotten music. - Adam

Just a huge thank you for all the work you put into this blog!

It is really appreciated!!!

what didn't you understand of 'REPORT BROKEN LINKS THROUGH E-MAIL, NOT AS COMMENT.'?