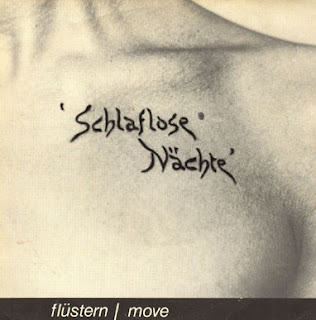 After Suspect from Amsterdam stopped (their LP I will do later on) Peter Prima (drums), Berni von Braun (guitar) and Gila Du Juice (born as Gila Gröger, but called Moussou on the 7" cover) went on to form Schlaflose Nächte. Their only LP 'The Angel Will Not Come' you can find on the Mutant Sounds blog a while ago, but here is the 7" that came before that on Armageddon Records (from 1981) and their only cassette 'Good Pain' which was released by Ssssnatch Cassettes (according to discogs). Also I don't know which year. Somebody transformed it to CDR years ago and made a shitty copy of the cover, so I can't read it. Just like the image on discogs actually. One track is recorded live in Berlin with Pig Bag, I believe 'Last Poets', judging by the live quality of the sound. I have no idea what happened with Prima and Braun, but Gröger went to London and formed Sugardog with Here Boy and Fritz of 23 Skidoo. Great crisis funk as they could only make that in that period.

thank you!
another great post,
a lot of new things to enjoy:)